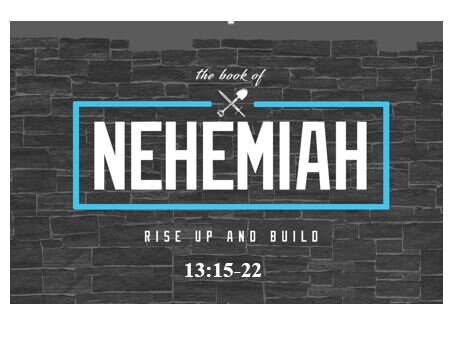 God’s people are famous for breaking their promises; for failing to fulfill their commitments; for backsliding and slipping away from their spiritual moorings. Yet God is patient and gracious with us – giving us opportunity to repent and rededicate ourselves to simple faith and obedience. But we must wake up to the reality of the spiritual decay and recognize that we are slowly being boiled alive.

Raymond Brown: “All too easily, an ugly thing becomes tolerated, even viewed as the possibly useful thing, then the permissible thing, and finally the attractive thing. It does not happen in a moment. Standards are lowered gradually and imperceptibly. Sin becomes known by another name. We accommodate at one stage of life things which earlier would have been totally unacceptable.”

Nehemiah shows us how to deal very directly with spiritual decline. Not weary in re-fighting old battles. Like continually re-weeding the garden – keep popping back up

You could take the same pattern of response that we are going to study today and apply it to any area of dealing with sin.

I. HEART ISSUES RELATED TO SECULARIZING THE SABBATH –

A. Faithless — No Satisfaction in God or Trust in His Provision – No Spirit of Thanksgiving – But Covetousness . . . Leading to Self Righteousness

“In those days I saw in Judah some who were treading wine presses on the sabbath, and bringing in sacks of grain and loading them on donkeys, as well as wine, grapes, figs, and all kinds of loads, and they brought them into Jerusalem on the sabbath day.”

Secularizing the Sacred; Profaning the Sabbath

Six days were more than sufficient for the transaction of business – that would still hold true today; no law … but still no good reason to devote seven days to commerce

Piper: I know of no other way to triumph over sin long-term than to gain a distaste for it because of a superior satisfaction in God.

Kidner: Before the exile there was a growing impatience with the Sabbath law. Amos in the 8th century BC could see the merchants chafing at the weekly shut-down of business (Am. 8:5); and sure enough, by Jeremiah’s time they had had their way. Load after load of merchandise poured in and out of the city on the Sabbath. Jeremiah’s warning of what must follow (Je. 17:19-27) was clearly in Nehemiah’s mind as he saw the forbidden burdens in transit (15, cf Je. 17:21, etc.) and spoke of history repeating itself (18).

Steven Cole: No doubt the Jews had excuses (they would have called them “reasons”) for violating the Sabbath. “If I don’t tread my grapes that day, they will rot!” “Everyone else is doing business then. I can’t compete if I close up shop!” “All those imported fish will just rot and go to waste if we don’t buy them! It wouldn’t be right, to waste all that good food.”

Byron Harvey: We must see all time as a gift from God, and use it to glorify Him, not merely in functional ways to gain advantage for ourselves. Sunday is the Lord’s Day; I do not believe it is the Christian Sabbath, though good people differ with me on that point. At the same time, perhaps we ought to consider, not from a legalistic standpoint, but out of a desire to honor God, treating Sunday differently than other days. The Puritans, from whom we could learn a lot, called Sunday “the market-day of the soul”, when the soul’s business was to be done, with that taking precedence over all other business. We could do worse.

B. Fearless — No Fear of God

“Also men of Tyre were living there who imported fish and all kinds of merchandise, and sold them to the sons of Judah on the sabbath, even in Jerusalem.”

“What is this evil thing you are doing, by profaning the sabbath day?”

How do we do that in our lives today?

John Gill: indeed, the law of the sabbath was not binding on these Tyrians, but then they tempted the Jews to break it, by bringing their ware to sell.

C. Foolish — No Wisdom from Lessons of History

“Did not your fathers do the same so that our God brought on us, and on this city, all this trouble? Yet you are adding to the wrath on Israel by profaning the sabbath.”

Cf. Babylonian Captivity – Psalm 79 – What did we learn?

Noah’s Flood – What did we learn?

Destruction of Jerusalem in 70 AD – What did we learn?

Ananias and Sapphira – What did we learn?

“So I admonished them on the day they sold food.”

Warn, admonish, call to witness against

“Then I reprimanded the nobles of Judah and said to them, ‘What is this evil thing you

B. Confinement: Closing Off Opportunity

“And it came about that just as it grew dark at the gates of Jerusalem before the sabbath, I commanded that the doors should be shut and that they should not open them until after the sabbath. Then I stationed some of my servants at the gates that no load should enter on the sabbath day.”

Knew that the regular gatekeepers would be subject to bribes; trusted his own servants to fulfill this responsibility

“Once or twice the traders and merchants of every kind of merchandise spent the night outside Jerusalem. 21 Then I warned them and said to them, ‘Why do you spend the night in front of the wall? If you do so again, I will use force against you.’ From that time on they did not come on the sabbath.”

Getz: Even so, some merchants stayed all night outside the walls, perhaps hoping people would slip outside in the darkness to purchase their goods.

“And I commanded the Levites that they should purify themselves and come as gatekeepers to sanctify the sabbath day.”

Yamauchi: The Sabbath was sanctified, not just by a negative cessation of ordinary labor, but by a consecration of that day to joyous gatherings. Fasting and mourning were not to be observed on the Sabbath. . . God meant the sabbath to be set apart from other days not only by the things that were not done on it, but by what was done, that it was a day for men to enjoy themselves on, and in accordance with the notions of feast days in the Scriptures, gave a front place in this enjoyment to more sumptuous eating and drinking than on other days.

“For this also remember me, O my God, and have compassion on me according to the greatness of Your lovingkindness.”