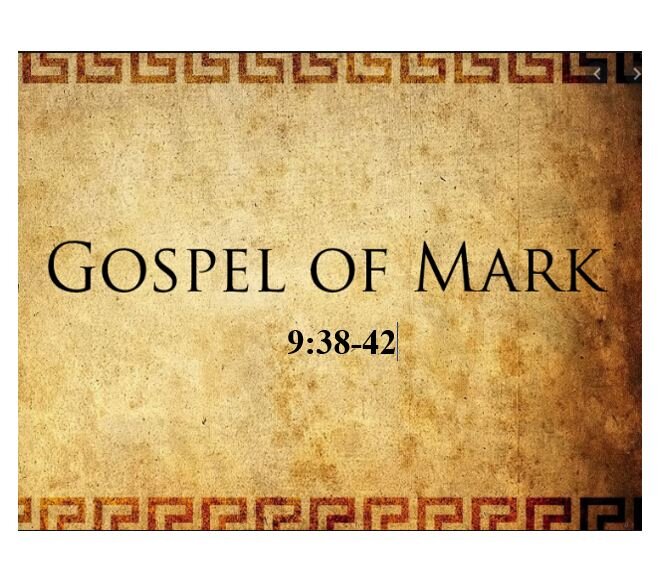 Overall context: Jesus has turned his focus to the Cross

– Oriented his teaching to focus on his inner circle of disciples

– Emphasizing to them the significance of His coming death and resurrection

– Training his disciples to assume leadership when he departs this earth

– Deny self; Take up your cross; Follow Me – what will that involve?

Immediate Context – Issue of Greatness in the Kingdom

Disciples were driven by the motivation of Competition – each wanted to be the best; they wanted their lives to count

This week we will see how that motivation for competition manifests itself in their relationship to ones they view as outsiders – ones who do not embrace all of the same distinctives as they do; ones who march to the beat of a different drummer and don’t fall into step with their marching band;

How should we relate to one another?

– We hold to the distinctive of plurality of elder government

– We are in the minority here; most churches have a Senior Pastor structure with a major differentiation between his role and that of other church leaders

How should we relate to one another?

Have you ever thought how sad it would be if our distinctives were so narrow and confining and even off base that Jesus himself would not be able to join our church and satisfy our membership criteria?? You can’t embrace both infant baptism and believer baptism – they are not both correct

Yet the spirit in which we interact with other genuine believers is very important – this lesson is crucial for people like us that are so zealous for truth; that place such a high priority on our biblical convictions

III. (:38-42) LESSON ON SECTARIANISM – THE PATHWAY TO GREATNESS IS RESPECTING DIVERSITY IN KINGDOM MINISTRY FROM THE PERSPECTIVE OF THE CROSS

A. (:38) Lesson Introduced – How to Deal with Believers from Different Camps

“John said to Him, ‘Teacher, we saw someone casting out demons in Your name,

and we tried to hinder him because he was not following us.”

Why did John speak up here? Very unusual for the sayings of John to be singled out —

2 Possibilities: (there may be more)

1) Conscience of the apostle John is now pricked – one of the sons of Thunder – probably acting in concert with his brother James – had just been involved in a situation where he had tried to enforce his status on a fellow believer — He had acted in pride; he had acted as an elitist; he had acted as if he had the final word on truth and ministry methodology – now he wondered whether he had done the right thing

2) Looking for commendation from Jesus? Thought that Jesus would approve of their aggressive and loyal action; still operating from the mindset of what would make them greatest in the kingdom; in their insecurity over the apparent success of another ministry, they came up with a way to put that ministry down in order to exalt themselves

Lane quoted by Constable: It is striking . . . that after each of the three major prophecies of the passion the evangelist inserts the response of one of the three disciple who were closest to Jesus: Peter (Ch. 8:32f.), John (Ch. 9:38), and James, with John (Ch. 10:35-37). Mark shows in this way that even the most privileged of the disciples failed to understand what the passion signified for their life and mission.

This situation hits home for me – we are quick to point out the faults in the ministry of others; wanting to legitimize our decisions and the path down which we feel the Lord Jesus has led us; we have such confidence in our interpretation of truth – often coming across as if we have a corner on truth; where is Humility? Where is our concern for our own areas of blindness and weakness?

Important to recognize several details about the individual he had confronted:

– This person was a believer – ministering in the name of Jesus Christ; under His authority; concerned for His glory; spreading His gospel; supporting His cause; only 2 groups from the perspective of Jesus: believers and non-believers —

Edwards: Gundry rightly notes the absurdity of the Twelve’s telling the independent exorcist to stop doing what they could not do in 9:14-29.

– This person was not interfering with the ministry of the disciples; on the contrary it was John and his compatriots who had taken the initiative to stick their nose in his business

– This person was acting independently of the team of the Apostles; not in their camp; not traveling around with them; not eating and fellowshipping with them; not making ministry plans and executing them in partnership with them

Action that John and the Apostles had taken was to try to hinder the ministry of this man:

– Sincere in their desire to maintain purity of doctrine and practice

– Sincere in their desire to protect the reputation of Jesus Christ

Think of people you know that stand in this same relationship – they are genuine believers; they are sincerely ministering in the name of Jesus; the gospel they preach is authentic (not some false gospel as Paul condemned in Gal. 1)

In order for us to effectively apply what Jesus teaches here, we must have some concrete examples in mind

1. Negativity is Forbidden — How could we try to hinder the ministry of others:

“But Jesus said, ‘Do not hinder him,”

– Disparaging their ministry – speaking against them in a negative way; trashing them; minimizing what they are accomplishing; questioning their motives; criticizing their methods; tongue is a powerful tool – like a fire – look at the strife it can stir up –

– Denying them resources or assistance –

(1 Cor. 3:3b-4) SECTARIANISM DERIVES FROM JEALOUSY AND PRODUCES

STRIFE IN THE CHURCH – DESTROYING UNITY AND STUNTING

SPIRITUAL GROWTH – CHECK OUT WHETHER YOU HAVE THE SPIRIT

A. Signs of Carnality

“For since there is jealousy”

“and strife among you,”

Signs of the Holy Spirit would be in contrast to these traits:

– the Holy Spirit glorifies Christ, not the individual

– the Holy Spirit promotes peace and unity in the body

Stedman: Now the mark of spiritual babyhood, Paul says, is “jealousy and strife.”

condition, you will always have divisions, factions, strife, and breaking into little

cliques and groups in the Church. This arises out of a sense of competition.

B. Carnality Should Trigger an Examination of Whether You Possess the Spirit

1. Fleshly = Unnatural State for the Believer

“are you not fleshly,”

2. Not Manifesting the Spirit = Danger Zone

C. (:4) Sectarian Spirit Makes Us No Different Than the World of the Unsaved

“for there is no one who shall perform a miracle in My name,

and be able soon afterward to speak evil of Me.”

We should not view such people and such ministries as Threats

Nothing for us to fear; why would we want to hinder them?

Hiebert: This brief incident stands as a firm rebuke to the spirit of sectarianism. It condemns that exclusive attitude which insists that only those who carry on their work in harmony with our own views and practices can be accepted as really doing God’s work. If they demonstrate that they are on God’s side in the war with Satan, even though their views may be imperfect, they must not be condemned for such work or regarded with abhorrence.

Hendriksen: spirit of intolerance, narrow exclusivism – Let us not be more restrictive than was Moses. Let us not be less broadminded than was Paul (Phil. 1:14-18). Let us follow the teaching of Jesus and, while maintaining what we ourselves regard as purity of doctrine, let us reach out the hand of brotherhood to all those who love the Lord Jesus Christ and build upon the firm foundation of his infallible Word.

3. Neutrality is not an Option

No neutrality; no sitting on the fence; no being in both camps – you are either supporting the kingdom of God or the kingdom of Satan – only 2 mutually exclusive options; there is not a third option

C. (:41-42) Lesson Illustrated and Applied – Greatness in the Kingdom is Measured by How You Humbly Serve Fellow Disciples of Jesus Christ

1. (:41) Positive Illustration and Application – Reward for Ministering to the Saints

followers of Christ, truly I say to you, he shall not lose his reward.”

2 John 10 – if someone is preaching a false gospel, do not even let them into your home; don’t give them a drink of cold water

Constable: This is one of the rare occasions when Jesus used the title “Messiah” of Himself. His use of it here makes the lesson even more forceful. The person giving the cup of cold water might have only a superficial understanding of Jesus. Nonetheless, if that person offered simple hospitality to one of Jesus’ disciples—”because” he was a disciple of “Messiah”—that one would receive God’s blessing.

Matt. 10:40 ff – especially supporting those who are ministering the gospel; you can share in the reward of the prophet

These outsiders who would minister to you a cup of cold water have a guaranteed reward . . .

But if you try to hinder their ministry and become a stumbling block to them, your reward is in danger

2. (:42) Negative Illustration and Application — Punishment for Endangering the Faith of Believers

“And whoever causes one of these little ones who believe to stumble, it would be

better for him if, with a heavy millstone hung around his neck, he had been cast

Strong words for John to hear; trying to shut down the ministry of a genuine fellow believer was serious business; not a pleasant way to die pictured here – take note: cult leaders; doctors performing abortions …

“little ones” – in the faith – just forming their convictions; life is tenuous; very vulnerable

Key: these outsiders (as you perceive them) are insiders from the standpoint of the Cross – they are those for whom Jesus has died; they are genuine believers