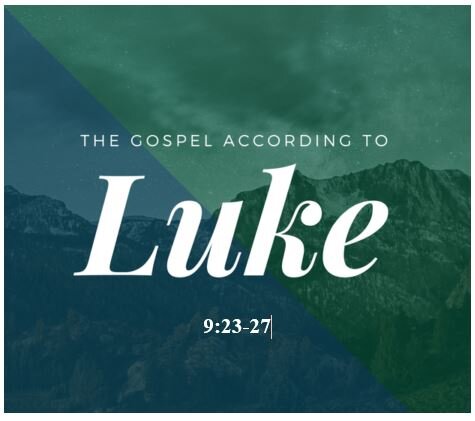 There are many false views of Christian discipleship. One camp promotes the concept of Easy Believism where the demands of discipleship are reserved for those Christians who want to advance to an elite level of the faith. But here Jesus is presenting these discipleship demands in the context of an evangelistic invitation. There is nothing “Easy” about the call that Jesus issues here. Instead He is demanding a complete reorientation of one’s life – to reject a self-centered life and to embrace the Lordship of Jesus Christ.

I. (:23-24) ESSENCE OF GENUINE CHRISTIAN DISCIPLESHIP

“And He was saying to them all, ‘If anyone wishes to come after Me,’”

This call to discipleship is issued to all people as part of the evangelistic invitation, not just some invitation to Christians to join a special elite class. If you want to be a Christian, this is what following Jesus will mean.

a. Self-Denial = Repudiating a Self-Centered Life

“let him deny himself,”

Now my friends, that’s counter cultural. I think that’s the closest thing possible to psychological heresy in this self-indulgent age to say, “Deny yourself,” to call upon people to embrace self -denial. And for that very reason I think we need to pause and give ear to what Jesus is saying. . .

b. Cross Bearing = Daily Death to Self

“and take up his cross daily,”

Donald Miller: voluntarily to lift to one’s shoulders the instrument of this own execution, and to follow Christ to the death. Paul put it clearly: “I have been crucified with Christ” (Gal. 2;20). This is a “daily” process, a progressive and continuous crucifixion of one’s natural self-centeredness (vs. 23). This involves sharing the humiliation of Christ, that we may also share his glory when his Kingdom comes in its fullness (vs. 26).

Geldenhuys: The “cross” is not the ordinary, human troubles and sorrows such as disappointments, disease, death, poverty and the like, but the things which have to be suffered, endured and lost in the service of Christ – vituperation, persecution, self-sacrifice, suffering, even unto death, as a result of true faith in and obedience to Him.

John Piper: In other words, treasure me more than your own comfort and your own safety. The opposite of self-denial is the idol of self-gratification, and the opposite of cross-bearing is the idol of self-preservation…..if you would save your life, you must lose it, and if you would follow Jesus, you must take up your cross daily. The great tragedy of much contemporary Christianity is that the cross is safely relegated to the distant past. And practically what it means is that Jesus was soaked in blood so that I can soak in a Jacuzzi. And the bigger the tub, the more we honor the cross—so goes the prosperity gospel.

1, Futility of Self Interest

“For whoever wishes to save his life shall lose it,”

“but whoever loses his life for My sake, he is the one who will save it.”

Geldenhuys: Everyone who tries selfishly to secure for himself pleasure and happiness in life will in fact doom his life to failure – he will never find real joy or full life. He commits spiritual suicide. But he who lays his life upon the altar in the service of Christ, who strives for His honour and for the extension of His kingdom, while keeping self in the background, will spontaneously find true joy and life – here and hereafter.

“For what is a man profited if he gains the whole world, and loses or forfeits himself?”

“For whoever is ashamed of Me and My words, of him will the Son of Man be ashamed when He comes in His glory, and the glory of the Father and of the holy angels.”

III. (:27) EXPECTATION OF THE NEARNESS OF KINGDOM DAYS

“But I say to you truthfully, there are some of those standing here

who shall not taste death until they see the kingdom of God.”

Donald Miller: The meaning of verse 27 is impossible to determine with any finality. It has been variously referred to the Transfiguration, the Resurrection and Ascension, Pentecost, the spread of Christianity, the growth of Christian theology, the destruction of Jerusalem in A.D. 70, and the Second Coming.

Geldenhuys: His View = the destruction of Jerusalem and the downfall of the Jewish national existence in Palestine in A.D. 70 (about forty years after Jesus’ words were uttered). In an unparalleled manner God revealed His kingly dominion over the unbelieving Jewish nation in that execution of judgment. By these means He showed once and for all that the Old Dispensation had passed away and that the New dispensation had indeed begun, that the ceremonial temple-religion had completed its preparatory task and that the old chosen people had to make room for the new people, the true Israel, the members (Jewish and Gentile) of the church of Christ. That event revealed the kingdom of God and His dominion in the history of man in an incomparable manner.

Darrell Bock sees an interpretation of Lk 9:27 as an allusion to both His transfiguration and the coming of the Spirit writing that “In the midst of this warning Jesus offers a promise: some will not see death until they see the kingdom of God. Contextually this is a reference to the preview of glory some of the disciples get in the transfiguration, an event recorded in Lk 9:28–36. Seen in light of Luke’s development in the book, the arrival of the kingdom also is made visible in Jesus’ current ministry (Lk 11:20; 17:20–21). In fact, the benefits of promise are distributed in Acts 2 (Lk 24:49 with Acts 2:30–36). So Jesus has in view both the preview of total glory and the initial arrival of promise as a result of his ministry. Those disciples who were present at the transfiguration, as well as those who shared in Pentecost, shared in the sneak preview of the kingdom’s arrival before they “saw death.