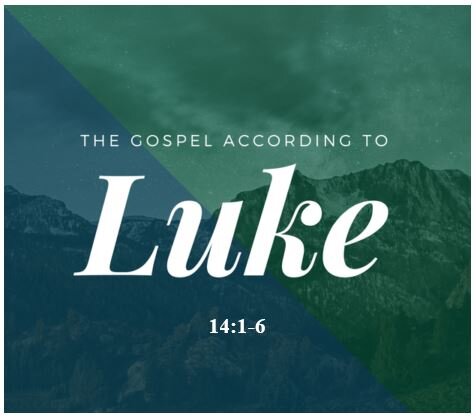 Jesus never shied away from controversy. He took advantage of confrontational situations to expose hypocrisy and demonstrate His love and compassion and mercy towards those who were suffering. He was particularly skillful at applying His wisdom to shut the mouths of His opponents who could offer no response to His devastating arguments or irrefutable illustrations. This just intensified the opposition on the part of the proud self-righteous religious leaders who were embarrassed by their inability to stand their ground with Jesus. They were always forced to retreat publicly and then regroup in private to try to come up with new ways to attack Jesus. When is it appropriate to show compassion and mercy towards those who are suffering? As Jesus had taught earlier in the Parable of the Good Samaritan, it is always our responsibility to take action when confronted personally with such suffering.

I. (:1-2) CONTROVERSIAL CONFRONTATION WITH HYPOCRITICAL HEARTS

on the Sabbath to eat bread, that they were watching Him closely.”

Morris: Jesus’ host was an important man. The Greek may mean a ruler (perhaps a member of the Sanhedrin) who was also a member of the Pharisaic party. Or it can signify “a leading Pharisee.” Either way he was an important figure. Dinner on the Sabbath seems often to have been a rather special meal (the food having all been prepared beforehand) and it was common to invite guests.

J. C. Ryle: He always said the right thing, at the right time, and in the right way. He never forgot, for a moment, who He was and where He was. The example of Christ in this passage deserves the close attention of all Christians, and specially of ministers of the Gospel. It throws strong light on some most difficult points,—our intercourse with unconverted people,—the extent to which we should carry it,—the manner in which we should behave when we are with them. Our Lord has left us a pattern for our conduct in this chapter. It will be our wisdom to endeavor to walk in His steps. We ought not to withdraw entirely from all intercourse with unconverted people. It would be cowardice and indolence to do so, even if it were possible. It would shut us out from many opportunities of doing good. But we ought to go into their society moderately, watchfully, and prayerfully, and with a firm resolution to carry our Master and our Master’s business with us.

B. (:2) Compassion Towards Suffering

“And there, in front of Him was a certain man suffering from dropsy.”

Was this trap situation staged by the Pharisees?

Steven Cole: Dropsy, also called edema, is a swelling of the joints or the whole body, often due to a faulty heart or to diseased kidneys or liver. Jesus could have told the man, “Come back after sundown and I’ll heal you,” thus avoiding a confrontation with the Pharisees. But He didn’t do that; He healed the man and then verbally confronted His critics.

MacArthur: Dropsy is edema. Dropsy was water retention. Accumulation of serous fluids in a tissue and in the body cavity, bloating. In itself it’s not a disease, but a symptom of a disease. It could be a number of things, serious compromises in the liver or the kidneys or the heart or all three. It’s kind of a bloating, indicates perhaps congestive heart failure. It could be liver disease. Alcoholism was a reality in ancient days and alcoholism can fill the abdomen with gallons of fluid. When pumped out they will return.

II. (:3-4a) CONTROVERSIAL QUESTION POINTING TO THE LEGITIMACY OF COMPASSION AND MERCY TOWARDS THOSE WHO ARE SUFFERING

“And Jesus answered and spoke to the lawyers and Pharisees, saying,

‘Is it lawful to heal on the Sabbath, or not?’”

No problem addressing the elephant in the room

Morris: The clear implication of all this is that deeds of mercy are in order on the Sabbath.

Lenski: The question is simplicity itself, and men like these ought evidently to be able to answer it at once. Surely they knew whether it was in harmony with the law or in conflict with it to heal (aorist: actually heal) on the Sabbath. “But they were quiet,” which is stronger than just silent. Strange, indeed; no one spoke up, no one came forward to do so, there is no whispering even among themselves – all are motionless, their eyes are fixed on Jesus. The situation became dramatic as the Lord looked around and waited for a reply, waited until it was clear that he would get none.

Deffinbaugh: Here was a touchy matter. Their traditions, their teachings, clearly forbade such healing. The Law of Moses, however, did not forbid healing on the Sabbath. Indeed, if the Sabbath was made for man, for his benefit and blessing, how could one refrain from healing on the Sabbath, if he had the ability to do so?

J. C. Ryle: Let us notice in this passage, how our Lord asserts the lawfulness of doing deeds of mercy on the Sabbath day. The qualification which our Lord here puts on the requirements of the fourth commandment is evidently based on Scripture, reason, and common sense. The Sabbath was made for man, for his benefit, not for his harm – for his advantage, not for his disadvantage. Interpreting God’s law about the Sabbath was never meant to impinge on charity, kindness and the real needs of human nature. Our Lord shows that deeds of necessity and mercy do not break the observance of the Sabbath.

“But they kept silent.”

Afraid to get into any type of debate with Jesus

J. Ligon Duncan: Now, why do you think they remained silent? One reason is this, my friends — they could not point to a single verse or word in the Law of Moses that forbade the healing of a person on the Sabbath. Not one verse of the Old Testament would substantiate a prohibition on Jesus, the Lord of Glory, healing someone on the Sabbath or of anyone being healed on the Sabbath. And yet, they believed that Jesus’ ministry practice compromised the Sabbath and so they were locked in on Him. And yet when He challenges them — “Is it right or not?” — nobody speaks up because they can’t quote the Bible. Now this is important because Jesus is not saying what the Bible says about the Sabbath is unimportant to the Pharisees. He is saying, “You have added to the Bible, and thus, you have diminished the authority of the Bible.” Jesus makes it clear that our place for final spiritual authority in faith and practice is found in the Bible, not in the doctrines and commandments of men, not in the additions that people come up with. However pious those ideas are, whatever the good motivations are for coming up with those extra things, we are not to burden the people of God with extra added commandments. This is one of the points of conflict between Jesus and the Pharisees.

III. (:4b-6) CONTROVERSIAL HEALING THAT SILENCES ANY POSSIBLE REFUTATION OF SHOWING COMPASSION AND MERCY

“And He took hold of him, and healed him, and sent him away.”

Deffinbaugh: Frankly, this man’s infirmity had been “used” by the Pharisees. Jesus graciously healed the man, but He would not leave him there to be humiliated. But how would he be humiliated? Jesus had already drawn attention to the error of the teaching of the Pharisees as it related to healing on the Sabbath. Jesus was now about to show them their hypocrisy in terms of their own practice. I believe that Jesus did not want this man to be among those who were about to be rebuked, and perhaps even shamed for using one who was infirmed, and so He sent him away. This is an act of mercy and grace, just as the healing had been.

“And He said to them, ‘Which one of you shall have a son or an ox fall into a well,

and will not immediately pull him out on a Sabbath day?’”

Geldenhuys: From this it is evident that they also recognized the principle that cases of real emergency pushed the ceremonial Sabbath laws aside. So they are hypocritical if they censure Him for healing on Sabbath days the sick who are in physical or spiritual distress. Although in most cases there is no immediate peril of their lives, their suffering and the distressing condition in which they find themselves (a condition also affecting the families of the sick people as well as the whole community) are such that love demands their being healed without delay.

Lenski: Jesus implies that such a deed, whatever strenuous work it required, would be perfectly lawful. Shall the same love, which require no labor at all, be denied a fellow man?

“And they could make no reply to this.”

Wiersbe: Jesus exposed the false piety of the Pharisees and the scribes. They claimed to be defending God’s Sabbath laws, when in reality they were denying God by the way they abused people and accused the Saviour. There is a big difference between protecting God’s truth and promoting man’s traditions.