Hebrews 7:1-10 — Identification and Greatness of Melchisedek 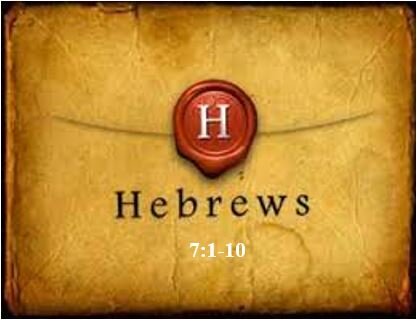 Here we have the extended introduction to the mysterious person of Melchizedek. He has already been mentioned, but now we have the opportunity to meet him and see his interaction with Abraham and his descendants. The fact that the priesthood of Christ has been identified as being after the order of Melchizedek must be explained. In what sense do we say that Melchizedek is a type of Christ?

Richard Phillips: the writer of Hebrews uses one of the most mysterious and obscure figures in all the Old Testament. . . This comparison [to Melchizedek] has been made three times already in the Book of Hebrews. It has been lingering, awaiting explanation, since it first occurred in 5:6.

Lenski: The writer has used the most effective psychological method of approach. He has first prepared his readers. He has repeatedly presented Jesus as our High Priest, in fact, as our Great High Priest (4:14); he has twice quoted God’s own statement in the psalm that Jesus was to be Priest and High Priest after the order of Melchizedek (5:6, 10). He has delayed until now to reveal in detail what this means. He has injected the strongest warnings against sluggishness of mind and the deadliness of unbelief. The preparation is complete; he now proceeds, and his exposition leaves nothing to be desired. The first step presents the main historical facts about Melchizedek. These are the data embodied in Genesis. Gar [“For”] = in order that you may fully understand what God means by saying that Jesus is a High Priest forever after the order of Melchizedek (6:20).

I. (:1-3) WHO IS MELCHIZEDEK? THIS MYSTERIOUS KING-PRIEST!

A. (:1a) Identification of Melchizedek – Mutual Roles of King and Priest

Leon Morris: Salem is another name for Jerusalem in Ps. 76:2 – but could also be some other location

John Calvin: It was doubtless no common thing that in a country abounding in the corruptions of so many superstitions, a man was found who preserved the pure worship of God; for on one side he was nigh to Sodom and Gomorrah, and on the other to the Canaanites, so that he was on every side encompassed by ungodly men. Besides, the whole world was so fallen into impiety, that it is very probable that God was nowhere faithfully worshipped except in the family of Abraham; for his father and his grandfather, who ought to have retained true religion, had long before degenerated into idolatry. It was therefore a memorable fact, that there was still a king who not only retained true religion, but also performed himself the office of a priest. And it was doubtless necessary that in him who was to be a type of the Son of God all things excellent should be found: and that Christ was shadowed forth by this type is evident from the Psalm referred to; for David did not say without reason, “Thou art a priest forever after the order of Melchisedek;” no, but on the contrary, by these words a sublime mystery was recommended to the Church.

“priest of the Most High God,”

Mohler: Surprisingly, he has a coalesced ministry as a king and priest, which sets him apart from any other priest or king in Israel. While Melchizedek’s kingship is important, the author primarily develops the significance of Melchizedek’s priesthood and how it relates to Jesus.

Hewitt: This title of Jehovah was also used by the Phoenicians, and it is evident that the worship of the one true God was not confined to the family of Abraham.

“who met Abraham as he was returning from the slaughter

of the Kings and blessed him,”

R. Kent Hughes: So when Abraham returned to his home after the slaughter of the kings he was a hero, at the pinnacle of martial success. Can you see him proudly astride his lumbering camel, smeared with the dirt and blood of battle, leading his 318 proud men plus Lot and all the captives and all the plunder through Jerusalem? If so, you have the “feel” necessary to begin to appreciate Abraham’s strange, mystic encounter with a shadowy figure of immense grandeur – Melchizedek, the priest-king of Salem.

2. (:2a) Melchizedek Received Tithes from Abraham

“to whom also Abraham apportioned a tenth part of all the spoils,”

C. (:2b) Idealization of His Role as King

“was first of all, by the translation of his name, king of righteousness,”

Definition of Idealization: to think of or represent someone or something as perfect

Kent: The meaning of Melchizedek is king of righteousness. This is mentioned first, not because of coincidence but because the author deliberately wants to emphasize the typology involved. Righteousness is basic to the priesthood, and peace comes from it. Melchizedek was a king whose name and realm connoted these concepts, at least etymologically, He provided a type of Christ, whose person and work accomplishes true righteousness and peace. It was Christ who was “the Holy and Righteous One” (Acts 3:14); and by satisfying the righteousness of God as our substitute, He provides peace with God for all believers (Rom. 5:1; Col. 2:20; Eph. 2:14).

“and then also king of Salem, which is king of peace.”

Charles Spurgeon: Note well the order of these two, and the dependence of the one upon the other; for there could be no true peace that was not grounded upon righteousness; and out of righteousness peace is sure to spring up.

David Guzik: As always, righteousness comes before peace. Righteousness is the only true path to peace. People look for that peace in escape, in evasion, or in compromise; but they will only find it in righteousness.

D. (:3) Idealization of His Role as Priest

1. No Recorded Ancestors to Qualify Him

Kent: The Levitical system made the priests’ pedigree of utmost importance. Not only the high priest but all the priests had to be able to prove their genealogy or they would be excluded from the priesthood (Ezra 2:62). To be a priest, one’s father needed to be a descendant not only of Levi, but of the priestly family of Aaron within that tribe. His mother needed to be an Israelite, but not every Israelite woman was eligible. No woman who was divorced or had an immoral past could be taken as a priest’s wife (Lev. 21:7), not only because it would be inappropriate for her husband, but it would provide an unworthy mother for the sons who might otherwise qualify as priests.

Mohler: Melchizedek is a priest of God Most High by divine ordination.

2. No Recorded Time Boundaries to Limit Him

“having neither beginning of days nor end of life,”

T. C. Edwards: That Christ is Priest forever can be symbolically taught only by negations, by the absence of a beginning and of an end, in some such way as the hieroglyphics represent eternity by a line turning back upon itself. In this negative fashion, Melchizedek has been assimilated to the Son of God.

“he abides a priest perpetually.”

Leon Morris: Thus it is not that Melchizedek sets the pattern and Jesus follows it. Rather, the record about Melchizedek is so arranged that it brings out certain truths that apply far more fully to Jesus than they do to Melchizedek. With the latter, these truths are simply a matter of record; but with Jesus they are not only historically true, they also have significant spiritual dimensions.

A. (:4a) Focus = the Greatness of Melchizedek

“Now observe how great this man was”

1. (:4b) Superior to Abraham Because He Received Tithes

“to whom Abraham, the patriarch, gave a tenth of the choicest spoils.”

Provides some insight into our giving to the Lord; these tithes came from “the choicest spoils” – literally, “the top of the heap” – not from anything defective or left over

2. (:5) Superior to the Levitical System Which Traces Its Roots to Abraham

“And those indeed of the sons of Levi who receive the priest’s office have commandment in the Law to collect a tenth from the people, that is, from their brethren, although these are descended from Abraham.”

R. Kent Hughes: His point is that the Levites’ ability to collect tithes came from the provision made by the Law, and not from any natural superiority. But Melchizedek was different. He “did not trace his descent from Levi,” and yet, as a figure of immense superiority, he collected tithes not from the people, but from Abraham!

Kent: The right to tithe someone involves a certain authority and thus a superiority. In the case of the Levitical priests, their authority stemmed from the Mosaic law. It could be considered only as an official supremacy for this specific purpose, and not some inherent superiority, for actually they were brothers.

Leon Morris: He did not trace his descent from Levi. Melchizedek was not simply one among a host of brothers. He was a solitary figure of grandeur. And he exacted tithes not simply form his brothers but from Abraham. His greatness stands out.

3. (:6) Superior to Abraham Because He Both Received Tithes and Blessed Him

a. Received Tithes from Abraham

“But the one whose genealogy is not traced from them

collected a tenth from Abraham,”

Hewitt: Here [vv. 6-7] and in verse 9 the writer makes use of Greek perfects to suggest that what is written is still speaking and, therefore, is still relevant.

“and blessed the one who had the promises.”

Kent: It must be understood that this “blessing” is something different from simply “praising” (as, for example, James 3:9, where men bless God, but are certainly not superior to Him). This blessing is an official pronouncement, coming from one properly authorized, which actually bestows something upon its recipient.

C. (:7) Fundamental Principle = the Lesser is Blessed by the Greater

“But without any dispute the lesser is blessed by the greater.”

“And in this case mortal men receive tithes,

but in that case one receives them,

of whom it is witnessed that he lives on.”

Mohler: The author wants the Hebrews to see that the Old Testament itself showed that the Levitical priesthood was always meant to give way to something greater.

Hewitt: Argument from the mortality of the Levitical priests

“And, so to speak, through Abraham even Levi,

“for he was still in the loins of his father

when Melchizedek met him.”

F. F. Bruce: an ancestor is regarded in biblical thought as containing within himself all his descendants

Deffinbaugh: our text helps us to understand the concept of federal headship.

Kent: The author may be considering the possible answer some might give that since the Levitical system came after Melchizedek, it was intended as its replacement and thus was superior to it. To this objection a most remarkable explanation is given.

Levi is viewed as being present and implicated in the action of his great-grandfather Abraham, even though he was not yet born. . . The principle involved is that there is a genuine unity in the human family, and that one is affected by the acts of his ancestors. It was not at all unusual for Hebrews to reason this way, viewing heredity in this realistic manner. (cf. Adam – 1 Cor. 15:22; Rom. 5:12) . . . Thus while all Israelites were subjected under the Mosaic law to the Levitical priesthood and could go to no other priest, yet Levi himself was tithed by Melchizedek in the person of his great-grandfather Abraham. The hereditary implications are seen not only by looking backward from Levi to Abraham, but also by looking forward from Levi to Aaron.

Mohler: Thus, the author of Hebrews closes his argument by using the concept of corporate identity to illustrate that Levi was biologically present when Abraham encountered Melchizedek.