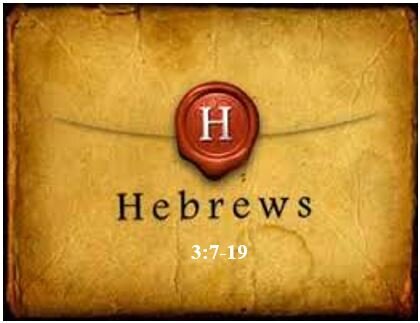 The history of the Jewish nation documents the failure of the people in the wilderness under the leadership of Moses to obey God and trust His providential care. Instead they provoked God to the point of being excluded from entering into the rest of Canaan. Now that we have such a superior Apostle and High Priest in Jesus Christ, let us be careful not to fall away due to hardness of heart and unbelief. Instead, we need to respond immediately with sensitivity to the voice of the Holy Spirit. We need to encourage one another to persevere and demonstrate that we truly are partakers of Christ and ones who are privileged to enter into His rest.

Cf. Matt. 13:20, 21 – the seed that springs up quickly but has no root and falls away when suffering and persecution come

Hewitt: a solemn warning is given to show that unbelief leads to disobedience, and unbelief and disobedience to apostasy, and that the inevitable result is the loss of God’s rest.

REMINDER OF ISRAEL’S FORMER FAILURE IN THE WILDERNESS

“Therefore, just as the Holy Spirit says, ‘Today if you hear His voice, Do not harden your hearts as when they provoked Me, As in the day of trial in the wilderness,’”

“just as the Holy Spirit says” — Affirming the inspiration of the Scriptures by the Holy Spirit; cf. Heb. 4:12 for the power of the living Word that still speaks to us today

R. Kent Hughes: Every Jew knew this passage by heart because its opening line served as a call to worship every Sabbath evening in the synagogue.

Heweitt: In the original both provocation and temptation are proper names. In the LXX they are translations of the Hebrew words Meribah and Massah. The two illustrations given of the hardening of the heart are taken form the history of those who left Egypt under Moses. As one is found at the beginning of the wanderings (Ex. xvii. 1-7) and the other at the end (Nu. xiv. 1-13), the suggestion is that the hardening of the heart was a process which persisted for forty years.

Morris: To “harden” the heart is to disobey the voice of God and act in accordance with one’s own desires. This is what Israel did in the wilderness.

“Where your fathers tried Me by testing Me, And saw My works for forty years.”

Kent: refers to the wilderness period in which Israel saw numerous miracles and other instances of divine guidance, but still continued to resist. In spite of God’s unmistakable presence among them, they frequently acted as if they had been abandoned, and demanded continuing proofs of God’s leading. Such testing of God is a demonstration of unbelief, for it says in effect, “We don’t believe your promise to provide for us, and we demand new evidence. This went on for a period of forty years, throughout the entire wilderness experience from Rephidim onward. Such action in the face of repeated miracles was clearly inexcusable.

Mohler: Israel presumed on God’s kindness. God graciously preserved them for forty years. He delivered them. He kept them alive. He provided manna for them. He guided them through the desert with a pillar of fire by night and a pillar of cloud by day. And yet they presumed on that grace and grumbled against the Lord.

MacArthur: Unbelief never has enough proof. Asking for more proof is simply a pretext, an excuse, a delaying tactic.

“Therefore I was angry with this generation,”

Morris: We should not miss the reference to the anger of God. The Bible is clear that God is not impassive or indifferent I the face of human sin. He is a “consuming fire” (12:29), and his inevitable reaction to sin is wrath.

b. Sin Arises from Internal Rebellion

“And said, ‘They always go astray in their heart;’”

Piper: Note well, the issue of perseverance is not first an issue of behavior. Don’t be asking first: What actions does God want me to do? The issue in this text is one of the heart. It is a matter of believing or trusting or hoping in God. Look verse 10at: “Therefore I was angry with this generation, and said, ‘They always go astray in their heart.'” Why didn’t the people get to enter the promised land? You could say, they sinned and they rebelled and they murmured. Yes. But look at how this writer ends the chapter. Verse 19: “And so we see that they were not able to enter because of unbelief.” Persistent sin in the face of God’s mercy is a sign of unbelief.

c. Sin is Antithetical to God’s Will

“And they did not know My ways;”

a. Stirs Up God’s Wrath

b. Shuts One Out from God’s Secure Blessing

“They shall not enter My rest.”

Here the rest involved in the OT example was the privilege of entering the Promised Land of Canaan under God’s protection and provision as the secure place of blessing.

But that rest typified much more for these Jewish believers as will be developed in the next paragraphs.

Morris: “Rest” points to a place of blessing where there is no more striving but only relaxation in the presence of God and in the certainty that there is no cause for fear.

Wil Pound: more than just entrance into the land of Canaan. “Rest” (katapausis) in the original means to cessation of activity and in this verse points to a place of blessing where there is no more striving. It is a permanent cessation of activity, or permanent rest. It is a relaxation in the presence of God knowing there is no reason to fear. The writer of Hebrews has a great interest in “rest” (Heb. 3:11, 18; 4:1, 3-5, 8-11).

A. (:12-13) Urgency of Avoiding Apostasy Due to the Imminent Danger

1. (:12) Guard Yourself Against Apostasy

“Take care, brethren, lest there should be in any one of you an evil,

unbelieving heart, in falling away from the living God.”

R. Kent Hughes: Many of those, perhaps most, who left in the Exodus had an inadequate faith in God. At first, due to their miserable plight of 430 years of slavery, the brilliant leadership of Moses, the repeated miraculous plagues on Pharaoh, and the grand miracles of the pillars of cloud and fire and the parting of the sea, they were ready to follow God anywhere. But as soon as the initial glow wore off, they outrageously cried, “Is the Lord among us or not?” (Exodus 17:7). It was a fair-weather, herd-instinct faith – good until the first trial, when it dissolved in unbelief.

The depth of their defective belief produced one other subsidiary characteristic – contempt/irreverence. Hence all the railing against God and his faithful servants. Thus we understand that the pathology of a hard heart originates in unbelief that spawns a hardened contempt [which in turn shows itself in distinct behavioral patterns – namely, negativism, grumbling, quarreling and disobedience] and, as we shall see, a hardness that works out in sinful disobedience.

“But encourage one another day after day, as long as it is still called ‘Today,’ lest any one of you be hardened by the deceitfulness of sin.”

Imminent Danger: of being hardened by the deceitfulness of sin

Hewitt: Sin is almost personified here, as it is in Romans vii. It deceives the sinner, exaggerating the satisfaction that can be gained from sin, then blinds his mind to spiritual truth and also to the certainty of God’s retribution.

Morris: The author sees Christian fellowship as very important. It can build people up in the faith and form a strong bulwark against sin and apostasy (cf. 10:25; Matt 18:15-17).

B. (:14) Necessity of Perseverance for Genuine Believers

“For we have become partakers of Christ,

if we hold fast the beginning of our assurance firm until the end;”

C. (:15-19) Reminder Again of the Historical Example of Failure in the Wilderness

“while it is said, ‘Today if you hear His voice,

Do not harden your hearts, as when they provoked Me.’”

a. (:16) Scope of the Rebellion = Entire Generation Led by Moses

“For who provoked Him when they had heard?

Indeed, did not all those who came out of Egypt led by Moses?”

b. (:17) Scope of God’s Anger = Entire Generation that Sinned and Died

“And with whom was He angry for forty years?

Was it not with those who sinned, whose bodies fell in the wilderness?”

Hewitt: The question has been asked whether Moses and Aaron, who died in the wilderness, came under this condemnation.

Certainly they, as well as others in that generation, were not unbelievers, but for the purpose of this historical illustration they were all guilty of disobedience and excluded from the rest of Canaan. The application to spiritual apostasy is going to ratchet up both the level of sin and the depth of the judgment to the final outpouring of God’s wrath.

c. (:18) Scope of Loss of Blessing = All Who Were Disobedient

“And to whom did He swear that they should not enter His rest,

but to those who were disobedient?”

“And so we see that they were not able to enter because of unbelief.”