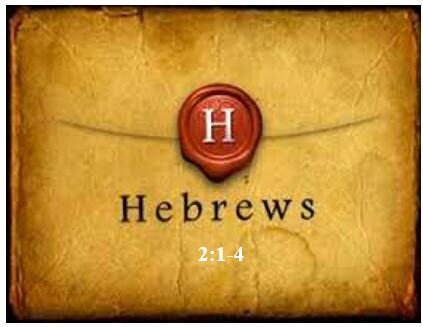 IN LIGHT OF THE SUPREMACY OF CHRIST, PAY ATTENTION TO THE AUTHENTICATED GOSPEL MESSAGE LEST YOU DRIFT AWAY AND SUFFER THE CONSEQUENCES

This parenthetical warning is directed towards some group of professing Jewish converts who were under severe pressure to recant their loyalty to Christ and revert to Judaism. The majority of this group would be genuine believers as demonstrated by the exhortations to Christian conduct throughout the epistle. However, the danger is that there would be a limited number who would apostasize (like Judas) – revealing that they never were genuinely converted. (There is never any question that one could lose his salvation.) So the writer addresses them as believers, but stresses the need to persevere in the faith. Here the warning is specifically not to drift away but to pay attention to the Gospel Message – both in light of the supremacy of Christ and in light of its apostolic eyewitness testimony and divine corroboration. The certainty of judgment for those who fall away from the faith adds to the writer’s serious tone in reinforcing this warning.

R. Kent Hughes: Some in the church were also in danger of being blown away from their moorings and drifting away from the truth of Christ and back into “the Dead Sea of Judaism.” In an effort to counter this, the writer has held high the supremacy of Christ:

 his cosmic supremacy as Creator and Sustainer of all (vv. 2, 3),

 his Levitical supremacy as the ultimate priest seated in Heaven (v. 3),

 and his angelic supremacy in that he is superior to angels in name, honor, vocation, existence and reign (vv. 3-14).

This manifold superiority of Christ is meant to be an anchor to hold them to their Christian faith amidst the increasingly stormy seas of persecution. Indeed, it is meant to be the universal anchor for all imperiled souls for all time.

Robert W. Ross: Nothing should be permitted to cause us to drift past this one fixed point of safety [the Gospel]. No calamity, influence, force, or circumstance should be tolerated that weakens us with reference to the hope of salvation. A vessel launched unpiloted into midstream is made to drift past its landing point on the opposite shore by the currents at work in the stream. So the currents of life work against us unless we take heed.

Westcott: After establishing the superior dignity of the Son in comparison with that of angels, the writer of the Epistle pauses for a moment to enforce the practical consequences which follow from the truth before he sets forth the work of the Son for humanity. It is obvious that a revelation given through such a Mediator carries with it more solemn obligations on those who receive it and heavier penalties for neglect than a revelation made through angelic ministry.

I. (:1) THE SUBSTANCE OF THE WARNING – PAY ATTENTION

“For this reason we must pay much closer attention to what we have heard,”

Slogan of the Vanderbilt Commodores

Mohler: “For this reason” – Given the superiority of Christ over the angels and his identity as the divine Son of God, Jesus both demands and deserves to be heard.

Kent: danger is that they might drift on by . . . even though he writes to professed Christians, he is wise enough not to take for granted that all profession is genuine

Mohler: “Hearing” the Word of God rightly is a spiritual hearing – one that involves believing, obeying, and submitting to what is heard. Right hearing is more a matter of the heart than a function of the ear.

B. Avoid Drifting Away

“lest we drift away from it.”

MacArthur: Both phrases have nautical connotations. The first refers to mooring a ship, tying it up at the dock. The second was often used of a ship that had been allowed to drift past the harbor. The warning is to secure oneself to the truth of the gospel, being careful not to pass by the only harbor of salvation. The closest attention must be paid to these very serious matters of the Christian faith. The readers in their tendency to apathy are in danger of making shipwreck of their lives.

II. (:2-4) THE SERIOUSNESS OF THE WARNING – NO ESCAPING JUDGMENT IF YOU DRIFT AWAY —

MORE SEVERE ACCOUNTABILITY UNDER THE NEW COVENANT THAN THE OLD COVENANT

A. (:2) Judgment for Disobedience to the Old Covenant

“For if the word spoken through angels proved unalterable,”

“and every transgression and disobedience received a just recompense,”

R. Kent Hughes: The writer uses a Hebrew argument style called qal wa homer (literally, “light and heavy”), which employs the reasoning that if something is true in a light or lesser thing, it is true in a heavy or greater thing. . .

Sometimes the punishment came directly from Heaven as when in one day 23,000 died or on another occasion when many were killed by snakes (1 Corinthians 10:5-10). At other times the just punishment came through legal processes.

Parunak: “Transgression” is a positive violation of God’s command. “Disobedience” is more a refusal to hear what he has to say, and thus focuses on sins of omission. The fundamental principle of God’s justice is that sin must be punished, and the righteous protected.

B. (:3-4) Judgment for Neglecting the New Covenant

1. (:3a) No Exemptions When it Comes to Accountability

“how shall we escape if we neglect so great a salvation?”

Thomas Hewitt: The privilege of hearing this great message of salvation conveyed by God’s own Son far exceeds the privileges of hearing the law given through God’s servants. If then the transgressors of the law did not escape the penalty for every breach of that law but received their just reward, how can those under the new aw escape God’s judgment?

Kent: “neglect” – The word (disregard) was used of men who rudely and willfully ignored a gracious invitation to a feast (Matt. 22:5), and of Timothy’s obligation not to neglect the exercise of his spiritual gift (1 Tim. 4:14).

You can’t argue that you have some type of special dispensation that gives you an escape from accountability to the gospel imperative;

You also can’t argue that there is any doubt about the substance of the gospel message and what is required in terms of repentance and faith.

MacArthur: the three great reasons why a man should not neglect the gospel of salvation are:

– the character of Christ,

– the certainty of judgment,

– and the confirmation of God.

2. (:3b-4) No Confusion When it Comes to the Message and Required Response

a. Initial Proclamation by the Lord Himself

“After it was at the first spoken through the Lord,”

b. Subsequent Confirmation by the Eyewitnesses = Apostles and Early Disciples

“it was confirmed to us by those who heard,”

c. Supernatural Witness and Corroboration by God through the Holy Spirit

“God also bearing witness with them, both by signs and wonders and by various miracles and by gifts of the Holy Spirit according to His own will.”

God has authenticated both His messengers and their message in a variety of very dramatic ways.

Kent: There was also divine confirmation of the message of salvation. By signs (supernatural occurrences which acted as proofs or indicators) and wonders (supernatural acts which produced awe among the beholders) and various miracles (a variety of displays of divine power), God indicated His involvement in the message of salvation. Many of these are recoded in Acts (e.g. 3:6-8; 5:12, 18-20; 6:8; 8:6; 9:33-34, 40-41, et al.).

F. F. Bruce: When Paul tries to recall the Galatian Christians to the simplicity of Christ, he reminds them that it was the message of faith and not the imposition of legal requirements that was confirmed among them in the beginning by God’s supplying the Spirit to them and performing mighty works in their midst (Gal. 3:5). Similarly the recipients of Peter’s first epistle are reminded how the gospel was first preached to them in the power of “the Holy Spirit sent forth from heaven” (1 Pet. 1:12). The New Testament writers (including our author at this point) would not have appealed to the evidence of these miraculous manifestations if there was any possibility that their readers would reply that they had never seen or heard of such things. They were matters of common knowledge and widespread Christian experience, and the reference to them here is calculated to restore the readers’ faith in the gospel as God’s authoritative message.

Parunak: “according to His own will” — It is interesting that the writer feels the need to remind them that these miraculous dispositions were rationed by God. Some people today feel that if we do not experience signs, wonders, and powers, and demonstrate showy gifts of the Spirit, our salvation has fallen short. Perhaps the same tendency was seen among the readers of this epistle. This phrase reminds us that these gifts are contingent, not universal. God provided them to attest the revolutionary message of the gospel.