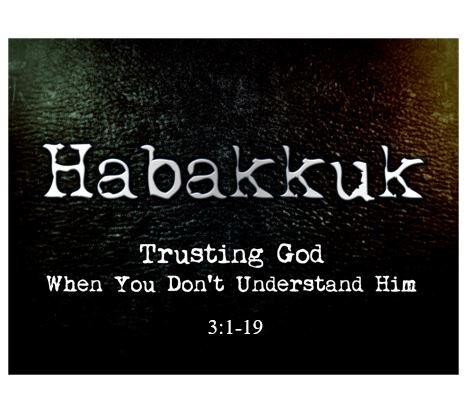 – We have seen the prophet wrestle honestly with the perplexing paradox of How could a righteous God use a wicked nation as His instrument of discipline against His own people? (Chapter 1)

– We have seen God answer by reinforcing the permanent principle that God is a righteous Judge and the wicked will by no means escape udgment. (Chapter 2)

– Now we see the prophet resting triumphantly in the persevering perspective that The joy and strength of the Lord can sustain the prophet through the short term pain of discipline in anticipation of God’s long term deliverance. (Chapter 3)

COMBINES ACCEPTANCE OF DISCIPLINE WITH HOPE FOR THE FUTURE

“A prayer of Habakkuk the prophet, according to Shigionoth.”

No longer arguing and complaining because of his perplexities

MacArthur: The precise meaning is unknown (its singular form occurs in the heading to Ps 7). In light of the musical notation at the end of chap. 3, it is thought that it has a musical-liturgical significance, and that this chapter was sung.

1. Foundational Attitude of Fear of the Lord = The Beginning of Wisdom

“Lord, I have heard the report about You and I fear.”

“O Lord, revive Your work in the midst of the years,

In the midst of the years make it known;”

3. Plea for Mercy – While Accepting Discipline

One of the key phrases in the book

II. (:3-15) HISTORICAL REMEMBRANCES OF GOD IN HIS MAJESTIC GLORY AND SOVEREIGN POWER –

And the Holy One from Mount Paran. Selah.”

MacArthur: Teman, named after a grandson of Esau, was an Edomite city (Am 1:12; Ob 9). Mount Paran was located in the Sinai peninsula. Both allude to the theater in which God displayed great power when He brought Israel into the land of Canaan (cf. Dt 33:2; Jdg 5:4).

“His splendor covers the heavens,

And the earth is full of His praise.

He has rays flashing from His hand,”

3. His Hidden Power Demonstrated in Wrath

“And there is the hiding of His power.

Before Him goes pestilence,

And plague comes after Him.”

“He stood and surveyed the earth;

He looked and startled the nations.”

2. (:6B) His Eternality Contrasted with Mortal Fragility

“Yes, the perpetual mountains were shattered,

His ways are everlasting.”

3. (:7) His Terrified Witnesses – En Route to the Promised Land

“I saw the tents of Cushan under distress,

The tent curtains of the land of Midian were trembling.”

4. (:8-11) His Power Demonstrated in Nature – But His Wrath Not Directed Against Nature

a. (:8) Waters of Turmoil – But Goal of Bringing Deliverance

“Did the Lord rage against the rivers,

Or was your anger against the rivers,

Or was your wrath against the sea,

That you rode on your horses, on your chariots of salvation?”

“Your bow was made bare,

The rods of chastisement were sworn. Selah.

You cleaved the earth with rivers.”

“The mountains saw You and quaked;

The downpour of waters swept by.

The deep uttered forth its voice,

It lifted high its hands.

Sun and moon stood in their places;

They went away at the light of your arrows,

At the radiance of your gleaming spear.”

“In indignation You marched through the earth;

In anger You trampled the nations.”

“You went forth for the salvation of Your people;

For the salvation of Your anointed.”

“You struck the head of the house of the evil

To lay him open from thigh to neck. Selah.

You pierced with his own spears the head of his throngs.

They stormed in to scatter us;

Their exultation was like those who devour the oppressed in secret.

You trampled on the sea with Your horses,

On the surge of many waters.”

A. (:16A) Foundational Attitude of Fear of the Lord = the Beginning of Wisdom

“I heard and my inward parts trembled,

At the sound my lips quivered.

And in my place I tremble.”

B. (:16B-17) Persevering Acceptance of the Discipline of the Lord

1. (:16B) Expectation of the Inevitability of the Discipline of the Lord

“Because I must wait quietly for the day of distress,

For the people to arise who will invade us.”

a. No Food From the Fields

“Though the fig tree should not blossom

And there be no fruit on the vines,

Though the yield of the olive should fail

And the fields produce no food,”

b. No Food From the Flocks

“Though the flock should be cut off from the fold

And there be no cattle in the stalls”

C. (:18-19) Abiding Confidence in the Sufficiency of the Joy and Strength of the Lord

“Yet I will exult in the Lord,

I will rejoice in the God of my salvation.”

“The Lord God is my strength,”

“And He has made my feet like hinds’ feet,

And makes me walk on my high places.”