1 Timothy 3:8-13 — Serving the Church of God – Qualifications for Deacons – Men of Dignity 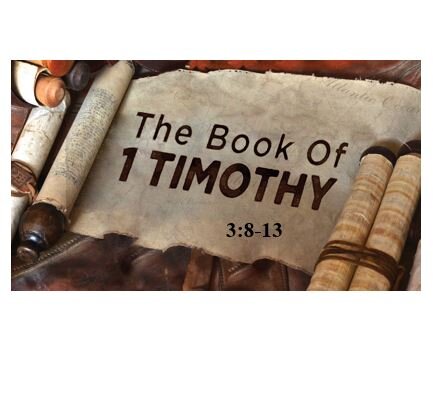 Wiersbe: “The first deacons were appointed to be assistants to the apostles. In a local church today deacons relieve the pastors/elders of other tasks so that they may concentrate on the ministry of the Word, prayer, and spiritual oversight.”

A. General Qualification — “men of dignity”

B. Men of Integrity

not a liar or a gossip; you can trust what he says

Earle: “has the idea of saying something twice, with the bad connotation of saying one thing to one person and something else to another… Metaphorically, the word means ‘insincere’ …”

2. Self-controlled — “not addicted to much wine”

4. Good Conscience in Faith and Practice —

“And let these also first be tested then let them serve as deacons if they are beyond reproach.”

D. Men with Exemplary Wives — “women must likewise be”

Note: talking about wives of deacons rather than an office of deaconess

Hiebert disagrees: “The ancient interpreters generally took the view that the reference is to deaconesses. The New Testament gives indication that deaconesses existed in some apostolic churches. Phoebe is called ‘a deacon of the church that is at Cenchrea’ (Rom. 16:1, Gr.).'”

4. “faithful in all things”

1. “husbands of only one wife”

2. “good managers of their children and their own households”

“For those who have served well as deacons”

B. Reward — “obtain for themselves”

Hiebert: “The word ‘standing’ means ‘a step’ and so denotes an advanced position. Paul is not speaking of the ecclesiastical advancement of the deacon to the overseership, nor is he speaking of the future reward in glory. The reference is to the excellent community standing and recognition which they require through their having rendered good service.”

Possibly refers as well to excellent standing with God?

2. “great confidence in the faith that is in Christ Jesus”