1 Corinthians 9:1-14 — Financial Support in the Ministry 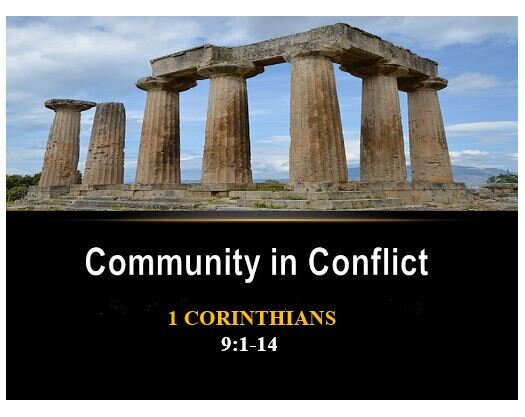 Some people imagine that Christian ministers should serve at their own expense. This passage clearly gives a number of reasons why the flock needs to take very seriously its responsibility to financially support its ministers in proportion to their labor and effectiveness. The general rule is simple: “the Lord directed those who proclaim the gospel to get their living from the gospel.” But how can we explain the Apostle Paul’s tent-making practice in this light? Some people always want to demand that their rights be respected and fulfilled. This passage gives some principles regarding higher objectives which might guide someone to refrain from insisting upon exercising all of their rights. In this pastoral example, Paul demonstrates how believers can refrain from the exercise of their Christian liberties in cases such as the context of the previous chapter = meat offered to idols. Sometimes the exercise of a right can actually be a wrong.

A. (:1-2) The Credentials of Authentic Christian Ministry (Especially of Apostles)

MacArthur: In their letter to Paul (see 7:1) the Corinthians must have made much of their liberty in Christ – a liberty they had been taught largely by Paul himself. Now he states his own freedom and his own rights. “I have no less freedom than you do,” he implies. “And I cherish my freedom no less than you do. But I cherish some other things even more.”

“Have I not seen Jesus our Lord?”

“Are you not my work in the Lord?”

“If to others I am not an apostle, at least I am to you; for you are the seal of my apostleship in the Lord.”

MacArthur: In ancient times seals were used on containers of merchandise, on letters, and on other things to indicate the authenticity of what was inside and to prevent the contents from being substituted or altered. The seal was the official representation of the authority of the one who sent the merchandise or letter. What was under the seal was guaranteed to be genuine. The Corinthian church was a living seal of Paul’s apostleship, the proof of his genuineness.

B. (:3-6) Delineation of Rights of All Christian Workers (Especially Apostles)

“My defense to those who examine me is this:”

Some people might look at a gospel minister who is supporting himself via secular work and argue that his ministry is not approved by God since he is not supported full-time in the ministry. Paul’s apostleship was under attack in Corinth. Others were exalting themselves as somehow more worthy of recognition and of a following that the Apostle Paul.

1. The Right to Basic Material Support

“Do we not have a right to eat and drink?”

2. The Right to Christian Marriage

“Do we not have a right to take along a believing wife, even as the rest of the apostles and the brothers of the Lord and Cephas?”

3. The Right to be Freed Up From Secular Labor to Devote Time to Ministry

“Or do only Barnabas and I not have a right to refrain from working?”

II. (:7) THE COMMON PATTERN OF WAGES APPROPRIATE FOR LABOR IMPLIES THE RIGHT TO FINANCIAL SUPPORT IN SPIRITUAL MINISTRY – 3 FAMILIAR ANALOGIES FROM COMMON OCCUPATIONS:

A. Soldiers who Risk Their Lives Deserve Support

“Who at any time serves as a soldier at his own expense?”

“Who plants a vineyard and does not eat the fruit of it?”

“Or who tends a flock and does not use the milk of the flock?”

A. (:8A) Not a Matter of Subjective, Personal Opinion

“I am not speaking these things according to human judgment, am I?”

“Or does not the Law also say these things? For it is written in the Law of Moses, ‘You shall not muzzle the ox while he is threshing.’”

David Guzik: In Deuteronomy 25:4, God commanded You shall not muzzle an ox while it treads out the grain. This law simply commanded the humane treatment of a working animal. In those days, grain would be broken away from his husk by having an ox walk on it repeatedly (usually around a circle). It would be cruel for force the ox to walk on all the grain, yet to muzzle him so he couldn’t eat of it.

C. (:9B-10A) Application to all Spiritual Ministers of the Gospel

“God is not concerned about oxen, is He? Or is He speaking altogether for our sake? Yes, for our sake it was written,”

D. (:10B) Fundamental Principle: The Laborer Should Share the Fruits

“because the plowman ought to plow in hope, and the thresher to thresh in hope of sharing the crops.”

IV. (:11-14) VOLUNTARILY FOREGOING THE RIGHT TO FINANCIAL SUPPORT DOES NOT UNDERMINE THE VALIDITY OF THAT RIGHT

A. (:11-12A) Rationale for Reaping Financial Support

1. Material Support is a Small Compensation for Spiritual Ministry

“If we sowed spiritual things in you, is it too much if we reap material things from you?”

2. Argument from the Lesser to the Greater

“If others share the right over you, do we not more?”

B. (:12B) Reason for Refraining from Demanding Such Support

“Nevertheless, we did not use this right, but we endure all things so that we will cause no hindrance to the gospel of Christ.”

There are special circumstances where the wiser course of action is to refrain.

Adam Clarke: Though we had this right, we have not availed ourselves of it, but have worked with our hands to bear our own charges, lest any of you should think that we preached the Gospel merely to procure a temporal support, and so be prejudiced against us, and thus prevent our success in the salvation of your souls.

C. (:13-14) Reinforcement of the Right to Support and its Validity

1. (:13) Reinforced by Appeal to Common Sense and Historical Practice

“Do you not know that those who perform sacred services eat the food of the temple, and those who attend regularly to the altar have their share from the altar?”

2. (:14) Reinforced by Direct Command from the Head of the Church

“So also the Lord directed those who proclaim the gospel to get their living from the gospel.”