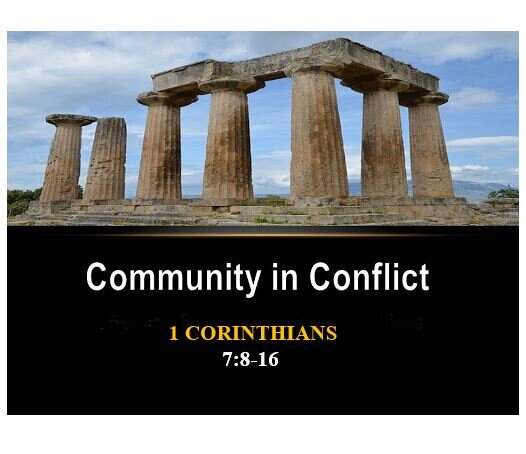 I. (:8-9) INSTRUCTIONS TO THE UNMARRIED AND TO WIDOWS – EITHER SINGLENESS OR THE MARRIED STATE MAY BE A VIABLE OPTION

A. (:8) Value of Remaining Single and Devoted to the Lord’s Service

1. Source of This Instruction

2. Subjects of This Instruction

“to the unmarried and to widows”

“The term ‘unmarried’ really includes all individuals mentioned in this first group, yet kai adds ‘widows.’ This conjunction is often used thus to single out a part from a whole in order to give it special attention. Widows might, indeed, have special reasons for thinking their state a sad one and thus for desiring to have it changed.”

3. Substance of This Instruction

“that it is good for them if they remain even as I.”

B. (:9) Freedom to Marry and Protect Against Sexual Temptation

“But if they do not have self-control, let them marry; for it is better to marry than to burn with passion.”

Again this is not comprehensive teaching or systematic teaching covering all of the reasons to marry; His emphasis in this section has been dealing with sexual temptation and the physical aspect of the relationship

II. (:10-11) INSTRUCTIONS TO THOSE UNITED IN CHRISTIAN MARRIAGE – DON’T DIVORCE YOUR SPOUSE

(Not looking here at the exception clause from Matt 19 – not covering the whole realm of systematic theology regarding marriage.)

1. Source of This Instruction

“I give instructions, not I, but the Lord”

2. Subjects of This Instruction

“But to the married”

3. Substance of This Instruction

“that the wife should not leave her husband”

“and that the husband should not divorce his wife”

“(but if she does leave, she must remain unmarried, or else be reconciled to her husband)”

Otherwise she also commits the sin of adultery

Reconciliation is only an option if neither has remarried.

III. (:12-16) INSTRUCTIONS TO BELIEVERS WITH UNBELIEVING SPOUSES – MAINTAIN THE MARRIAGE IF POSSIBLE

“But to the rest I say, not the Lord”

a. Command to the Believing Husband in Mixed Marriage

“that if any brother has a wife who is an unbeliever, and she consents to live with him, he must not divorce her.”

b. Command to the Believing Wife in Mixed Marriage

“And a woman who has an unbelieving husband, and he consents to live with her, she must not send her husband away.”

MacArthur: Some believers must have felt that being married to an unbeliever was somehow defiling. However, just the opposite is true.

B. (:14) Cause and Effect Principle: Appreciate the Opportunity for Godly Influence in the Home

1. Application to the Unbelieving Spouse

a. Godly Influence on the Unbelieving Husband

“For the unbelieving husband is sanctified through his wife”

b. Godly Influence on the Unbelieving Wife

“and the unbelieving wife is sanctified through her believing husband”

2. Application to the Children of the Mixed Marriage

a. Less Opportunity for Influence in Broken Home

“for otherwise your children are unclean,”

b. Greater Opportunity for Influence in United Home

“but now they are holy.”

C. (:15) Clarification: Divorce Allowed When Initiated (Pursued) by the Unbeliever

“Yet if the unbelieving one leaves, let him leave;”

2. Called to Peace, not Bondage

a. Not under Bondage

“ the brother or the sister is not under bondage in such cases,”

b. Called to Peace

“but God has called us to peace”

D. (:16) Caution: Don’t Presume that Your Influence Will Save Your Spouse

1. Application to the Believing Wife

“For how do you know, O wife, whether you will save your husband?”

2. Application to the Believing Husband

“Or how do you know, O husband, whether you will save your wife?”

Grosheide: Bondage and quarreling which are certain need not be accepted in order to achieve a highly uncertain goal.